Nestled in the rolling foothills of the Maluti Mountains of the north eastern Free State lies the Golden Gate Highlands National Park. 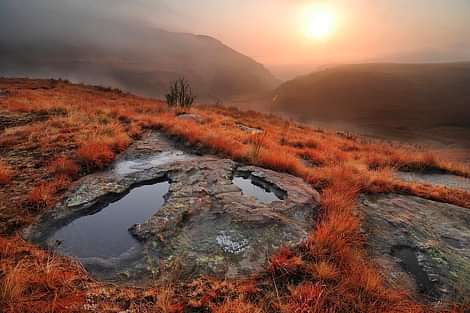 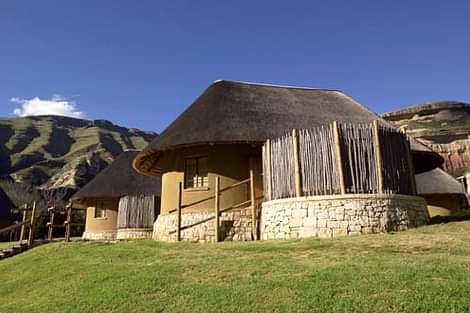 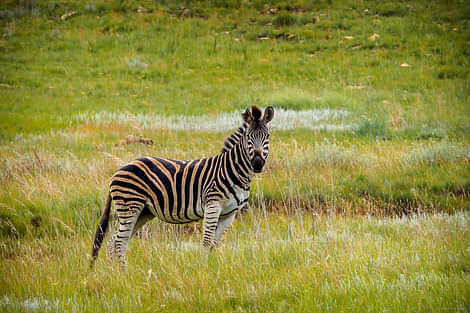 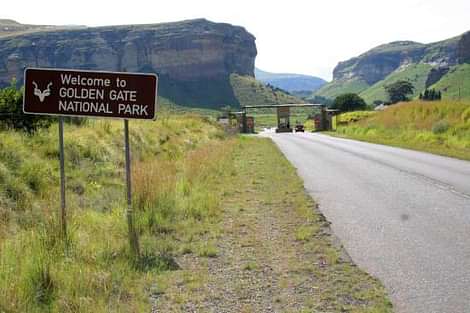 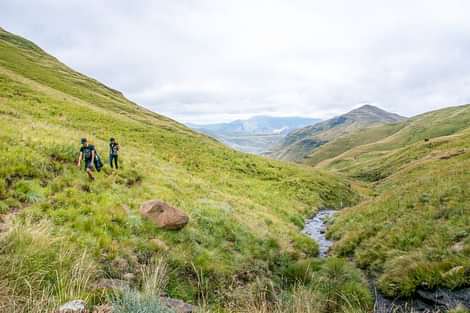 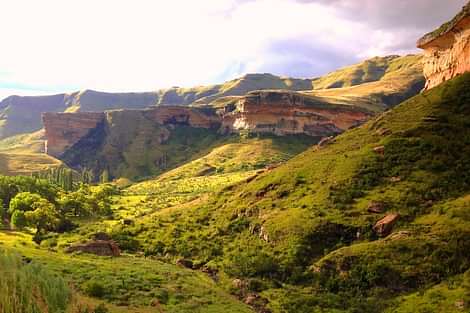 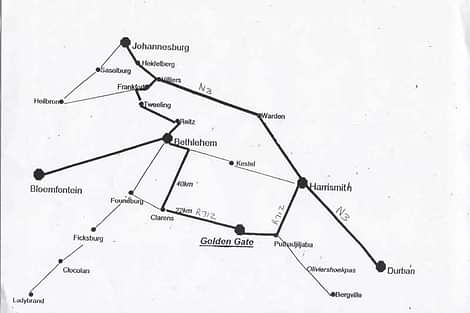 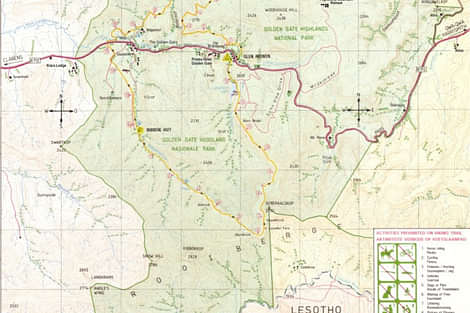 The Golden Gate National Park is a Free State Nature Reserve in South Africa, located in the north eastern part of Free State and derives its name from the brilliant shades of gold cast by the sun on the sandstone cliffs, especially the imposing Brandwag rock. The area is famous for its captivating scenery, invigorating climate and the accommodation offered in hotel rooms, rondavels (round huts) and self-catering chalets.

The park is a real highlight for visitors to the Free State. Popular attractions include the vast, colourful sandstone formations, which shine golden-yellow in the evening sun, and from which the area derives its name. Vegetation in the Golden Gate Nature Reserve consists mainly of wooded ravines, gullies and grasslands.

Golden Gate Highlands National Park was established in 1963 to protect the sandstone rocks were once shelters for the Bushmen. Guests can view many of their cave paintings that are well preserved. The park also boasts various rare and indigenous flowers that include the Arum Lily, Watsonias, Fire Lilies and Red-Hot Pokers.

This Free State Nature Reserve in South Africa is one of the last refuges of the rare Bearded Vulture and the rare bald ibis which breeds annually in Cathedral Cave. The park is also home to a variety of mammals that include Burchell's Zebra, Black Wildebeest, Eland, Blesbok, Springbok and the threatened Oribi. Some 140 bird species have been identified in the park, and a hide at the Vulture Restaurant enables bird lovers to view these creatures closely.

Mild highveld summers with the possibility of thunderstorms in the afternoon and cold winters with occasional snow transforming the park into a white wonderland.

The winter temperatures in Golden Gate can plummet to a mere -9 to -15 degrees C and that snow is a regular occurrence in the park.

Golden Gate primarily falls in a summer rainfall area (Sept to April) and the annual rainfall is approximately 760 mm per year. In very wet years this figure can rise to 1250 mm.

**Visitors with reserved accommodation who arrive after 17:30 may collect the keys to their accommodation at the Security Office, Glen Reenen Filling Station.**

Judging by the primitive stone tools and rock paintings found at various places throughout Golden Gate, the first inhabitants of the area were the Khoisan (Bushman/Hottentot group). There is no doubt that they lived under the many overhangs which offered excellent shelter.

After the arrival of the Basotho and the Europeans (hunters, cattle farmers and Voortrekkers) on the scene, the bushman moved away during the first decade of the 19th century. In the 1830s, the first European settlers colonized the area joining Golden Gate. Many Voortrekkers trekked through this land when it was still savage and raw.

On the afternoon of 23rd September 1837, a number of Voortrekkers under the leadership of Piet Retief came into the well-known Liebenberg’s Kloof. As they were planning to stay there for six days, Commandant Coenraad Meyer and some of his men asked Retief’s permission to shoot game in the narrow passes which separate Golden Gate and the surrounding area. They returned to the laager with nine wagons loaded with venison and hides. This gives us an idea of how plentiful game was.

During this time, bands of marauders and assassins sent out by Shaka and Dingaan of Natal, and Silkaats, chief of the Matabele in Transvaal, massacred or scared away almost all of the black tribes in the north-eastern parts of the Free State.

After the European farmers moved into the area, many Natal people left their homes and settled in the area west of the Drakensberg —some in the vicinity of Golden Gate. Because there was no real boundary, clashes between the Free Staters and Basothos occurred mainly in this area.

The Free State Volksraad refused to appoint a border patrol, but Sir Percy Wodehouse, the governor of the Cape, was asked in 1846 to erect beacons on the Rooiberge. The first of these was erected on a very high mountain top (the present Wodehouse-kop), and a second one on Bakenkop behind the Wilgenhof Environmental Education Center.

During this time, the problem with stock theft surfaced again. Moshesh (pictured) lead a surprise attack on Seconyella and conquered the area in which Golden Gate lies (Casalis, 1997). The Orange Free State became an independent republic in 1853, and after this numerous Basotho wars were waged. The era after the second Basotho war is of importance for Golden Gate because the farms which later became the park were incorporated into the OFS as part of the area which was conquered by the joined forces of the Transvaal and OFS.

The battles of Naawpoortshek, and the role played by Paul Kruger later in the war, lead to the founding of the town of Clarens (named after the town in Switzerland where Paul Kruger died in exile). The area south and east of the Rooiberge were given to Moshesh—in other words, the area where Golden Gate is situated was still a part of Basotholand. Though Moshesh honoured the agreement, some of his followers still clashed with the inhabitants of Bethlehem. President Brand persuaded the Free State Volksraad to declare war in 1865. After the treaty of Thabo Bosio in 1869 it was decided to give all the boers who fought in the second Basotho war the opportunity to buy land along the Caledon River in order to protect the border. A.G.P van den Bosch, the surveyor-general, determined the areas of three farms, namely Noord-Brabant, Vuurland and Witsiesoorsprong.

In a historic review of the farms which later became the Golden Gate Highlands National Park, Dr. A.P.J. van Rensburg related that the farm Vuurland was sold in December 1869 to Jacobus Charl Bender for R460. When it was later found that Bender did not have the full amount to buy the farm, it was confiscated by the Free State government and used as compensation for farmers who suffered stock losses during the Basotho wars.

Van Reenen named his new land Golden Gate. He was so impressed with the neighbourhood that after repeated attempts, he bought a section of Noord-Brabant (58 Morgen) in 1880 from his neighbour for only R50. In 1890, Abraham Albertus Cilliers divided his farm between his two sons, and one portion of the portions was named Gladstone which is currently where the admin and staff accommodation is located. In 1928, the young Cilliers who owned Gladstone divided the farm further and named the other half Wilgenhof. This is where the Environmental Education Centre is situated.

Golden Gate was not spared the ravages of the Anglo-Boer wars. Everything was razed to the ground during the Second Anglo-Boer War. Some 50,000 British troops entered Bethlehem and the Boers retreated into the Rooiberge. When the Southern passes were occupied by the British, the main Boer force retreated in the direction of Golden Gate. General Prinsloo eventually surrendered.

As the Boers retreated, they abandoned their heavy ammunition wagons. To avoid allowing the British to take the ammunition, they set the wagons alight. The intense heat from this fire scorched the earth, and there are some areas in the park which are still sterile. Even now, no grass can grow there. A good example of this can be seen near Mount Pierre.
A.A. Cilliers was sent to Ceylon as a prisoner of war, and Jan van Reenen was held captive in Ladysmith. All stock was raided, crops set alight and houses ransacked. The women and children were taken to concentration camps at Harrismith. However, Mrs. Cilliers and her children chose the dangers of the veld rather than the ‘mercy’ of the concentration camp and for many weeks took refuge in the hollow kranzes of Gladstone and Vuurland. Many groups have used caves for shelter.

Facts about the Park