Jozi on a Red Sightseeing Bus

It is as easy as pushing a button, filling in a few details, and you get your confirmation emailed to you with a QR code that is scanned at the Rosebank office on arrival.  Johannesburg and Soweto City Sightseeing Bus. The office is next to Hamleys Toy Shop in The Zone, Rosebank.  There is a hotel Shuttle Bus that does transfers to and from hotels in Sandton and Melrose Arch.  You are handed ear phones and off you go.  Your friendly driver welcomes you aboard and youre off on The Green Route with an amusing and entertaining pre-recorded commentary. [option of 16 languages] 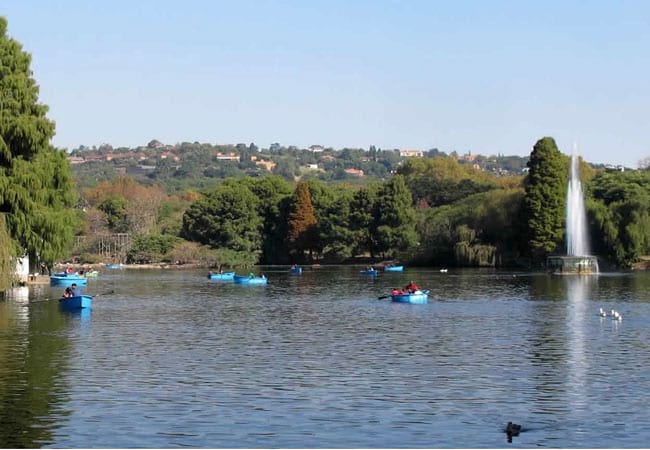 Boating at Zoo Lake in Johannesburg

The Green Route takes you around Zoo Lake, the Johannesburg Zoo and The Military Museum.  The 81-hectares of wooded ground which encompasses these three public spaces, was donated to the city of Johannesburg in 1904 as a recreation area by Hermann Ekstein on the condition that is was to be open to all people of all races. Pretty ‘avant garde’ for the times. Today the Zoo Lake is a favourite outdoor space for Joburg residents. Across Jan Smuts Avenue is the Zoo.  Max the Gorilla is the most famous resident of the Zoo.  A man who had robbed a house in Forest Town, a suburb which adjoins the Zoo, escaped the police and scaled a wall landing unfortunately for him in Max’s enclosure.  Max tackled him to the ground where the robber was rescued by the police. Max was shot in the scuffle and had to undergo surgery.  Max survived and is honoured with a life size bronze statue in the Zoo. Adjoining the Zoo is The Military Museum which houses the first jet engine fighter plane, designed and manufactured by the Germans towards the end of World War 2. It was the first two-seater night fighter, called the ME 262, and the one the museum has is the only existing plane of its kind in the world.  Its collection of World War 1 and 2 fighter planes - some the only remaining planes of their kind in the world - tanks used by the South African Defence Force in the war in Angola, armaments, medals, military insignia and uniforms, is impressive. 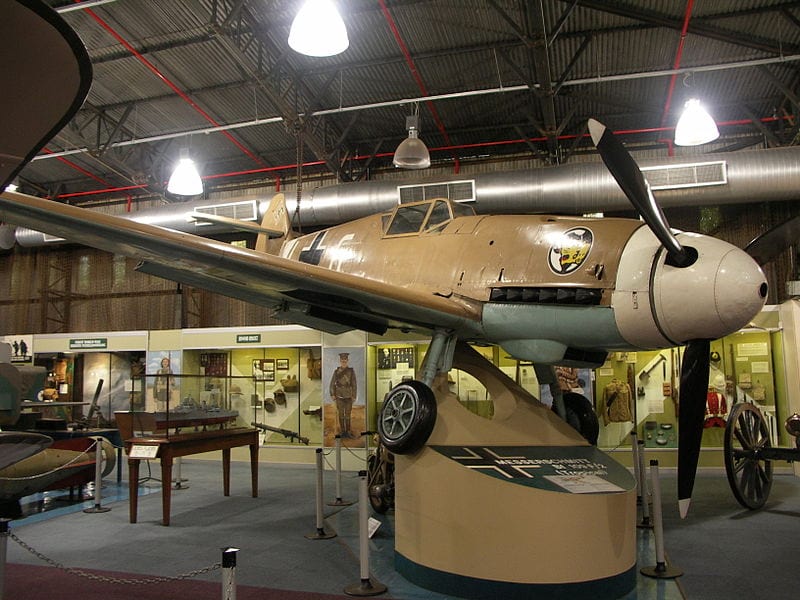 The Green Route continues through the up market, jacaranda lined streets of Houghton where Nelson Mandela was to live out his final days, and up Munro Drive to Upper Houghton where the view down over Johannesburg to the north stretches all the way to the distant Magaliesburg Mountains.  The Green Route ends at Constitution Hill. This stop that is worth spending some time exploring before you ‘Hop On’ the Red Route Bus.  The bus leaves every 30 minutes. 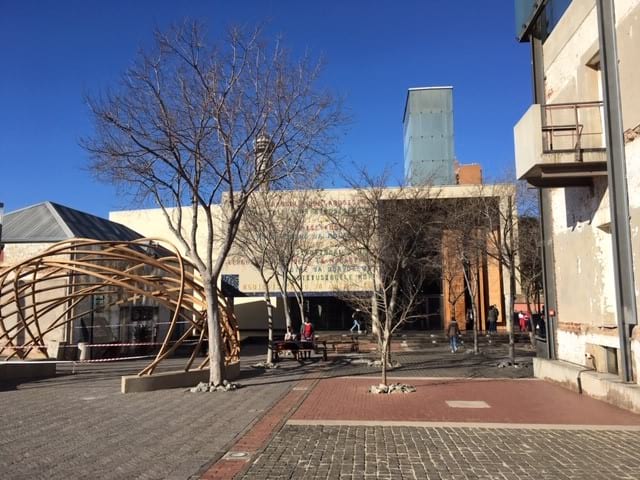 The Constitutional Court in Hillbrow

Constitution Hill is the home of the new democratic South Africa’s Constitutional Court where South Africa’s First Democratic Constitution was drawn up.  It is considered the World’s Best Constitution.  Up the stairs to the south of the court building is the Womens Jail Museum where Winnie Mandela and Albertina Sisulu were held for burning passes. Next door is the Old Fort, which was first a prison then a fort and then a prison again for Boer Soldiers under British rule.  Nelson Mandela spent two spells here awaiting trial.  I walked down the hill to board the bus feeling moved by the evidence of a system of government that was so diabolically wrong.  I was also proud to be South African and knowing that we are not victims but survivors. 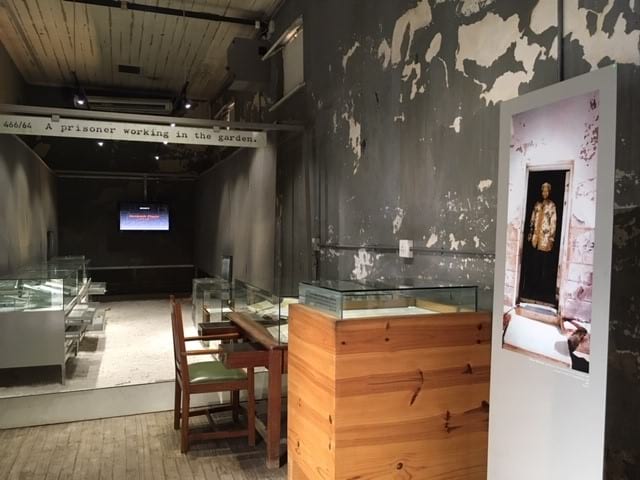 Mandela's Cell in the Fort on Constitution Hill

The Red Route Bus takes you through downtown Johannesburg to the mining district where you can take an historical guided walk through this interesting vibrant area. You pass some lovely colonial and Art Deco buildings as you head for the Carlton Centre. A guide will take you via a lift to the Top of Africa Viewing Platform on the 50th floor with spectacular views over the city. You can board the next bus 30 minutes later.  Then on through the southern suburbs of Rossettenville and Turfontein to stop 12, James Hall Transport Museum, then on to the Gold Reef City Casino Hotel.  This is a good place to explore. The Hotel is a Casino and leads through to the Theme Park. Get a feel for the Johannesburg of 100 years ago as you watch gold being poured and descend into a mine shaft all situated in a well restored mining town. This is also a good place to have lunch then catch the bus to continue your journey. 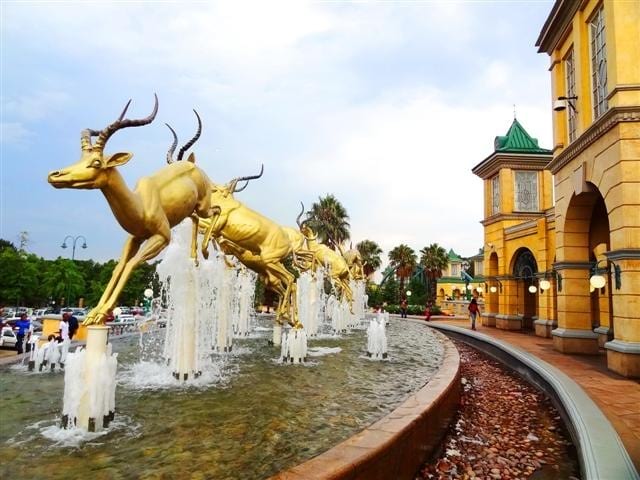 The Gold Reef City Hotel is where you can choose to take the extension Tour to Soweto.  I stayed on the bus to the next stop - the Apartheid Museum. This museum documents the rise and fall of Apartheid with intimate stories of the devastation that this iniquitous system brought to so many South Africans. It also hails the heroes of the time who stood bravely against fearsome force of the repressive Nationalist Government. At the Rivonia Trial in 1964, where Nelson Mandela was condemned to life imprisonment, he made a speech in which he summed up his stance: “It is an ideal which I hope to live for and to achieve. But if needs be, it is an ideal for which I am prepared to die”. He spent 27 years in jail and on his release was made the first democratic president of South Africa. He lived to see his ideal realized!! 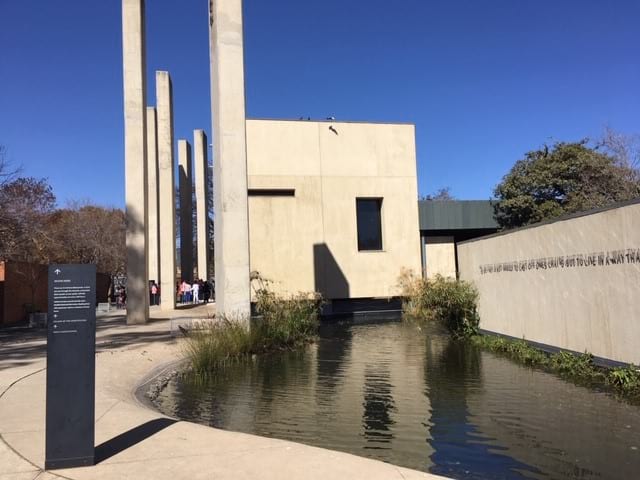 Entrance to the Apartheid Museum Showing the Pillars Representing the Seven Fundamental Values of our Democracy.

Then back on the bus and travel through the Newtown with its inner city regeneration programs, over the impressive Nelson Mandela Bridge to Braamfontein past some impressive Rand Lords homes and back to Rosebank where it all began.  A most enjoyable day and one I would like to repeat in other cities. The busses were on time, the drivers were friendly, and the stops were strategic.

Nelson Mandela Bridge Spanning the Railway from Braamfontein to Newtown